(Taedong River as seen from the Juche Tower in Pyongyang. Source: Commons)

The Taedong River is North Korea's second longest river and it flows through the heart of the country, bisecting Pyongyang and eventually discharging into the Yellow Sea. Despite serving as the main source of drinking water for the nation's capital of nearly 3 million, the river is heavily polluted.

North Korea has adopted ten major environmental laws (as of 2005) and, as in many areas, pays lip service to environmental protection. However, the country has one of the world's worst environmental records. Even though the destruction of the environment, like deforestation, has directly contributed to famine, flooding, and loss of life, the country's economic desperation has led them to continually ignore the environment in favor of industrial and agricultural activity. According to CSR Asia, by 2005 North Korea was releasing 10.8 million tons of air pollutants.

The Taedong estuary is the recipient of the bulk of the pollution released into the river. This is made even worse by the West Sea Barrage (completed in 1986) which prevents natural and adequate removal of pollutants. And thanks to a lack of necessary water treatment plants, the river has "an average chemical oxygen demand of 2.15 ppm in 2008, falling behind the environmental standard of 3 ppm." Industries along the river also dump as much as 30,000 cubic meters (over 1 million cubic feet) of polluted water a day directly into the Taedong. The estuary isn't the only place where river water ends up. A massive system of irrigation canals instituted in 1989 means that thousands of acres of farm land receive water from the Taedong, with crops (and eventually the humans that eat them) taking up the various toxins left behind.

North Korea's two largest coal-fired electrical plants lie along the Taedong. The Pukchang (also spelled Bukchang) Thermal Power Plant, located 6 miles east of the Kaechon internment camp in South Pyongan Province, is one of eight major coal-fired electrical plants in the country. It has a capacity of 1.6 GW (twice the capacity of America's Three Mile Island Nuclear Plant) and is the largest of North Korea's power plants. However, the reality on the ground is that Pukchang's output may be less than one third of it's designed capacity. Regardless of production, the plant still releases vast amounts of pollution into the air (over 6 million tons of CO2) and river.

From 2005 to 2007 the country embarked on a new construction program: cut off a 3.4 mile long portion of the Taedong River and turn it into a massive pool of toxic sludge. 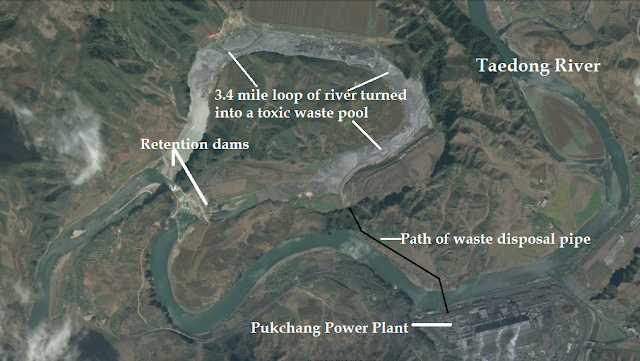 Previously, waste from the Pukchang plant was diverted into two smaller bends of the river, seen as the flat areas at the top and center-right of the loop. These coal ash basins were not fully separated from the river and during heavy rains pollutants would wash into the Taedong. This new, much larger waste basin was created when a neck of land (left side of image) was cut, the rock being used to build makeshift retention dams. 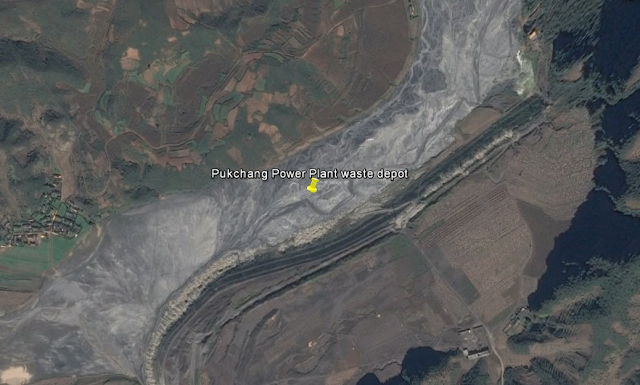 Dam failure is a well-known threat in North Korea and many smaller earthen dams (like this new retention dam) are routinely overtopped, particularly during heavy rains. Not only would that release large quantities of surface waste into the river, but it further weakens the dam and can cut channels into it, making future failure easier. Beyond the risks associated with overtopping, coal ash sludge contains large amounts of toxic materials and heavy metals. Lead, cadmium, arsenic, and even radioactive thorium and uranium - which occur naturally - are concentrated during the coal burning process and are then discharged into this basin. Lacking adequate barriers, this material will slowly seep into the river and result in a continual source of pollution for years to come.

In a touch of irony during the construction of this new basin, a small hydroelectric generating station was also built. It's located where the land was cut and takes advantage of the river's new, slightly shorter course.