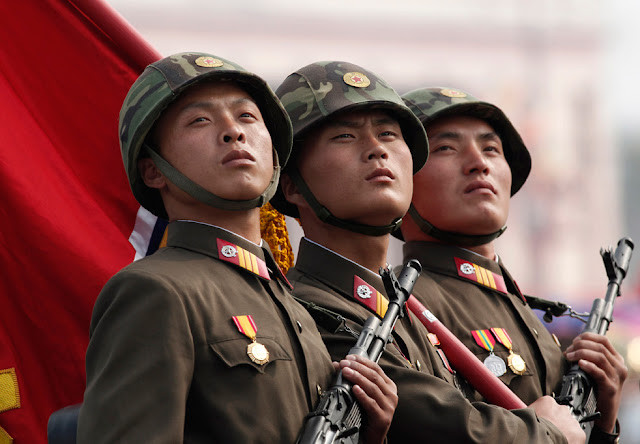 Much attention has been paid to North Korea's nuclear weapons, and the focus of recent talks and summits has been to get the country to give them up. However, little to no attention has been given to their conventional military forces which is among the world's largest. With a million men and women currently under arms, nearly 6 million citizens belonging to paramilitary organizations, 200,000 special forces personnel, 1,600 air defense sites, over 800 underground locations, 700 hardened artillery sites, and thousands of tons worth of chemical and biological weapons, North Korea's conventional military remains an extremely deadly force despite the outdated nature of its equipment.

Kim Jong Un has not only accomplished North Korea's long-standing goal of developing functional nuclear weapons and the capacity to launch them at the US through their ICBM program, but he has poured millions of dollars into modernizing the country's conventional forces. This modernization program includes the construction of entirely new bases, the expansion of existing ones, and there has been a large focus on specialized warfare centers like hovercraft bases and military operations on urban terrain (MOUT) facilities. An important take away in the face of denuclearization talks is that all of this activity has been happening since Kim took power and it continues to this very day. This article will examine four examples of this to show that Kim's army is marching right along.

One of North Korea's newest MOUT facilities is located 21 km northwest of Haeju. I have written about these facilities before, but this is a large base, was constructed within the last two years, and is located in an area with several other military training bases that have also undergone expansion. 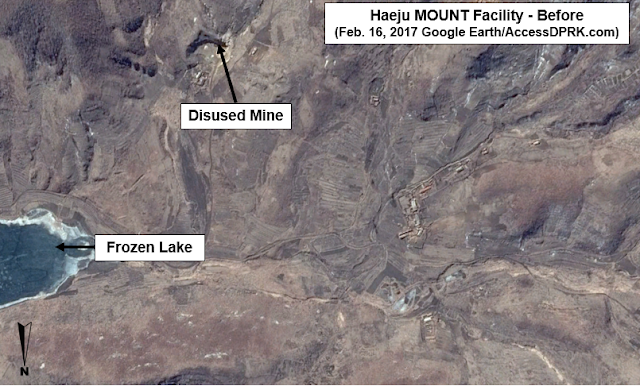 2017 satellite image of the MOUT facility's location before its construction. 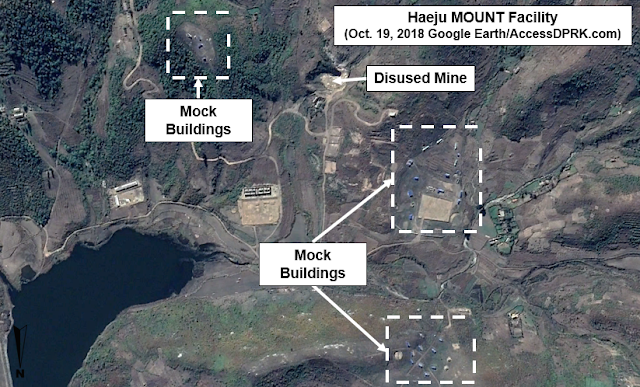 The MOUT facility after its construction. It has three sets of mock buildings used in training activities.

A close-up of the mock buildings constructed at the site and another training course.

The continued construction of MOUT facilities, some small and some large like Haeju's, points to the regime's commitment to asymmetric warfare and their dedication to the long-standing policy of supporting the forced reunification of the peninsula under Kim family rule.

Yonbong is a hovercraft base under construction that places North Korean military assets within 30 miles of South Korean territory. Located near the city of Songang, South Hwanghae Province, construction of the base began in 2014 and is ongoing. The hovercraft shelters are dispersed around small sea inlets and are built into the sides of low hills, which provides greater protection for the site. According to Joseph Bermudez, this is one of the most forward deployed naval sites North Korea has. While it may take some time before the base is completed, once it is, it will represent a great danger to South Korean islands in the region and to marine traffic. 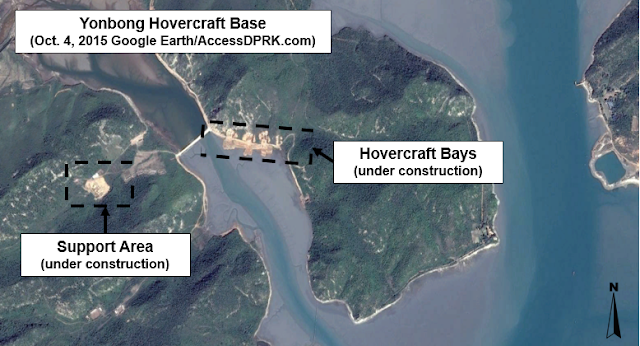 Yonbong facilities under construction in 2015. 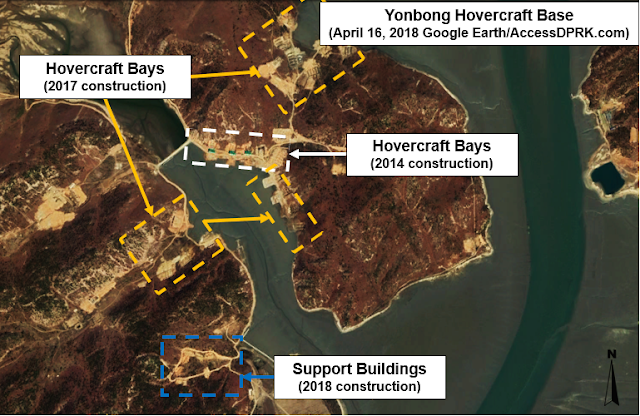 This image shows multiple years of work at the base, including work done in 2018 which was close to the Kim-Trump summit and despite North Korea's apparent "good behavior" of not testing missiles since 2017.

A close-up of the different groups of hovercraft bays.

The construction of this new base has been happening at the same time as several other facilities and while the Muncho Naval Base has undergone major upgrades. Munchon, located near the east coastal city of Wonsan, is home to Korean People's Navy units 155, 597, and 291 and houses a large number of hovercraft. Additionally, Kim Jong Un has ordered an increase in the production of high-speed torpedo boats. North Korea currently has over 200 such boats.
The combined effect of all of this is the heightened capabilities of North Korea to launch rapid attacks against South Korea and to defend their own borders against any Western allied invasion, thus it poses a risk to American forces in such an event.

North Korea has an estimated 20 missile bases. Of those, 13 have been positively identified, and one of them shows substantial recent activity (despite wrongly reported claims that North Korea agreed to halt production of their missiles).

The base is Yeongjon-do, located near the Chinese border. Known about for decades, previously unidentified construction has been located at the site and may be a second headquarters facility for an annex of the expanded base. 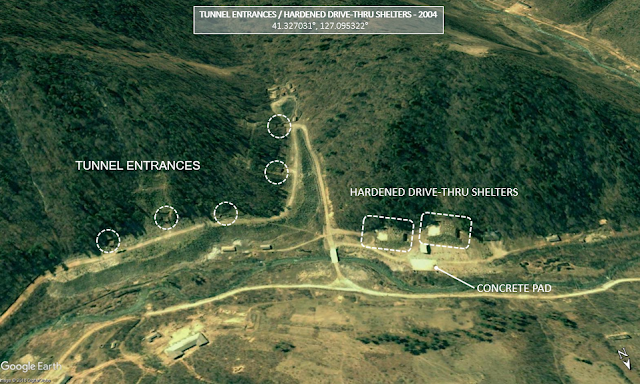 This 2004 image of the older, core base shows five tunnels and two "drive-thru" bunkers where mobile missile launchers could be loaded and deployed. Image from the Center for Nonproliferation Studies (CNS).

The area of concern lies 7 miles away. 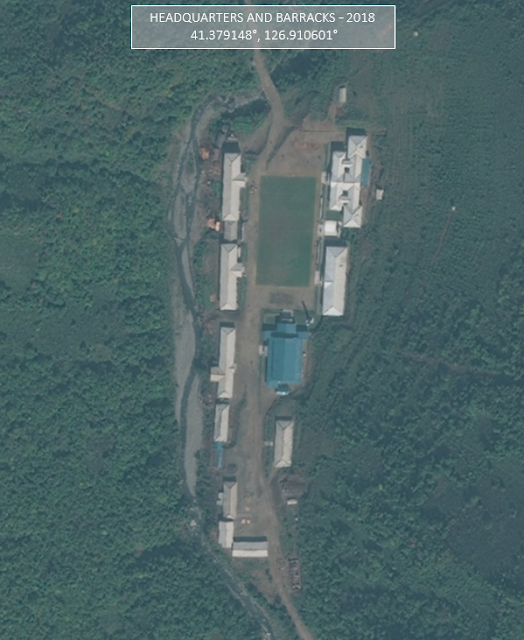 This 2018 image shows the new "headquarters" which was originally constructed in 2014. Image from CNS. 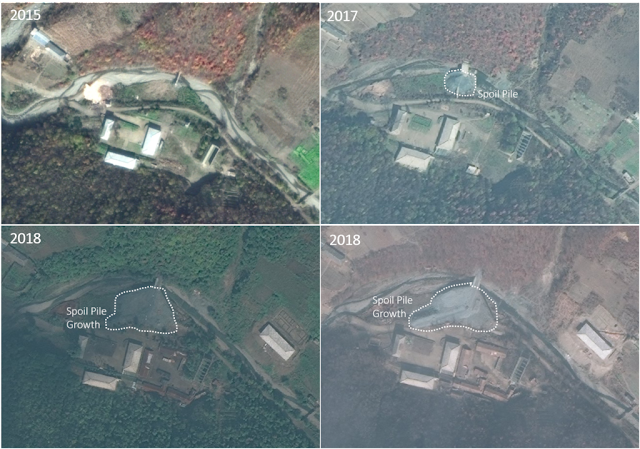 This comparison image shows the growth of a spoil pile (discarded soil and rock) from the excavation of the underground site. Image from CNS.

North Korea maintains over 800 underground facilities and tunnels which include sites to protect factories, nuclear, chemical, and biological weapons, missiles, and other important equipment. Based on the images, construction progress has sped up significantly since 2017. Its exact purpose is unknown to the public, but private sector analysts and intelligence agencies are carefully watching the area.

(Side note: I would like to say that while I had marked new housing construction associated with this  area years ago as part of AccessDPRK, I did not identify it as a missile base.)

Based on an AccessDPRK review of military sites in 2018, North Korea has 58 verified SAM (surface-to-air) locations (with a further three that may actually be dummy sites). This new site may be the 59th, although more recent satellite imagery once the site is completed will likely be needed for a positive identification. 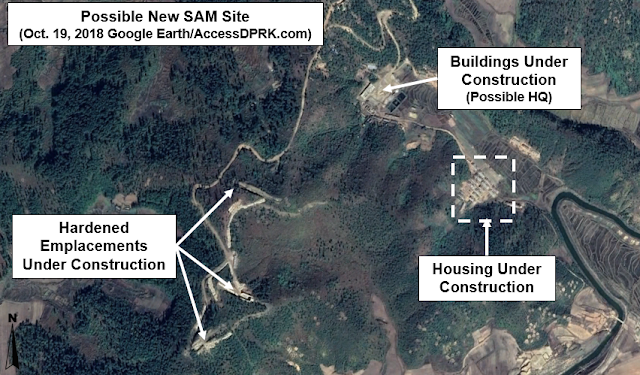 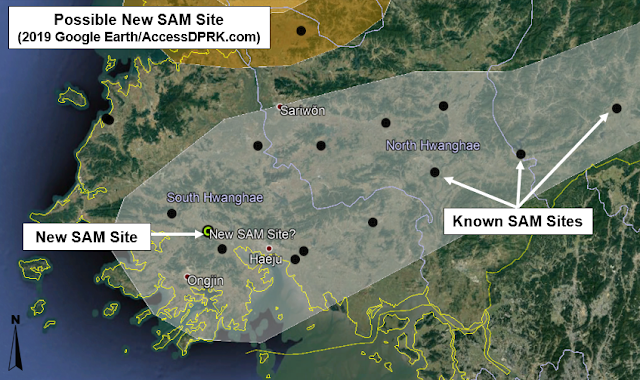 North Korea has been working to deploy their version of the Russian S-300 surface-to-air missile system, the KN-06. The KN-06 has a range of 150 km and is vehicle based, unlike their older SAM systems which are launched from dedicated SAM bases. However, the KN-06 can be stored in hardened bunkers until needed as well as kept mobile to avoid detection.

This new site is located within the main SAM belt that runs the length of the DMZ and it is placed near major cities and military bases that would need aerial defense. Its general design also somewhat differs from older, more conventional SAM facilities which makes me think it may be a kind "shelter site" (North Korea houses thousands of different missiles and various other equipment in bunkers across the country).

Relations between North Korea and the US and South Korea have definitely changed since 2016. But despite the current rapprochement with South Korea and photo-op summits with President Trump, their suspension of nuclear tests, and all of the claims coming from the Trump administration of denuclearization and even hints at general disarmament, the fact remains that North Korea's conventional military is marching right on with no signs of slowing down. These examples show that nearly every other non-nuclear branch of their military is continuing to be developed and countless millions are being poured into modernization schemes.

North Korea may have halted the development of new nuclear technology, but their current nuclear and ballistic technology is already more than capable of inflicting great harm on the US and our allies. And regardless of any nuclear halt, Kim Jong Un's army, navy, and air force are even more capable and adaptable today than it was two years ago.